For a fresh (on-line) MeCCG presence

All trader / collector's issues regarding specific cards and other MeCCG products: is this one especially valuable? what's in this box?; is this a fair trade?

I'm preparing to put all my cards into albums, hopefully later this week, and I'm trying to work out the best scheme I can for ordering the cards. &nbsp;In doing so, it occurred to me that it might be interesting (and useful) to hear how other people have their albums sorted.

So, for anyone who is interested, let's use this thread to share our album arrangement ideas. &nbsp;I'll get things started by sharing my own ideas.

Thorf's albums
A long time ago when I first started collecting MECCG, and there was only the base set, I decided on the following order: Within each category I sorted the cards alphabetically, and my album pretty much followed these lines. &nbsp;When the expansion sets began to appear, I first put them into my album separately, but once I had most of the cards I decided it would be more interesting to sort them in with the base set. &nbsp;Slowly the number of overall cards grew, and I adapted my original order into the following: I never had enough of The White Hand to warrant resorting my albums, and my Balrog cards stayed in their boxes for many years. &nbsp;But now I'm planning to use this scheme to fill my albums.

There are a few exceptions to the alphabetical order rule: Ringwraiths (both characters and hazards, as well as "Unleashed" resources) are sorted in numerical order and kept together on one album page. &nbsp;The same for the dragons (of which conveniently there are nine) - I have one page for dragons, one for dragons "Ahunt", one for "At Home", and one for dragon factions too. &nbsp;And lastly I keep the nine main "good" hazards from Against the Shadow on their own page, too - in opposition to the Nazgul.

Lately I am wondering if I should reconsider the position of the Fallen-wizards, and move them to the start together with their normal versions. &nbsp;But of course this brings up the problem of having one extra wizard who doesn't fit on the first page of the album.

Another thing I have considered is putting the Fellowship on its own page (again, nine being the magic number), but this would mean splitting Gandalf from his Istari brethren. &nbsp;Obviously if I combined these two ideas, it would solve both problems, but neither idea seems to me to be a perfect solution; the Fellowship is not really all that relevant to MECCG, and involves mixing a wizard with characters, while placing wizards and fallen-wizards together is not possible on a single page.

Probably the best solution would be to have the first page of the binder showing just card backs, and use facing pages (two cards back to back in each pocket). &nbsp;That would allow two sets of nine cards together, for a potential total of eighteen cards in a double page spread, making it possible to solve the problems I talked about above, as well as do nice things like place the hero hazards and the Nazgul on facing pages.

There are various other sets that could be made within a category:
Top

I got alot of spare cards sorted by date. By date? Yes, date, in chronological order as occurring in the books. That way you can read the cards like a story. Very nice! Galadriel is the first card, then Sauron and Cirdan.

Of course, you need to look up the correct order of the dwarves entering Bag End, or the order of Earendil's weapons as mentioned in Bilbo's poem.

Of course, not all cards fit in this order, but that doesn't really matter, the cards with relevance to Tolkien's work do fit, and the other ones, well just categorize them by type and alfabet. (who cares about Juoma anyway?).
'Elen sila lumenn' omentielvo
Top

I have done a similar thing using scans of my cards in the computer, although only for the Hobbit so far. &nbsp;Basically, I put all the Hobbit cards in one directory and then sorted them into chronological order for the story. &nbsp;So I have a truly "complete" illustrated version of the Hobbit!

I don't think I'd want to do it with albums, though - or at least not until sorting it out thoroughly on the computer first. &nbsp;Too many times I found a card in the wrong place, or moved one from the end back to the start, and that would be awful with albums.
Top

I have my cards sorted 2 ways. &nbsp;The first is sorted by set then alphabetically. &nbsp;

My second set is sorted by artist. &nbsp;It is fun to group cards across sets by who illustrated the card. &nbsp;You also get a good sense of which illustrators were consistently on top of their game, as well as being left scratching your head over why some other artists were chosen.
Top

Artists sounds like a nice way to sort. &nbsp;But again, this is something I do in the computer using scans of my cards. &nbsp;In fact I have an IMatch database with all the card images, to which I apply tags such as "Artist.Audrey Corman" and "Publications.Games.MECCG.1 The Wizards". &nbsp;I can then simply click on the category I want to view all the cards in that category - it's rather nice.

I'm somewhat surprised to hear you sort the cards alphabetically without subcategories - I don't think I've ever seen anyone do that before. &nbsp;Interesting.
Top

for what is worth ( &nbsp;:lol: ) all my collections are in alphabetical order following this order:
- Characters
- Ally
- Factions
- Items
- Resources (events)
- Sites
- Hazard Creature (even events)
- Hazard Events

How I organize my collection.

You have obviously spent a lot of time thinking about how to sort your cards! &nbsp;I like your ideas about keeping the dragons and good hazards on one page. &nbsp;That is really cool.

Personally, I have my cards separated by set. &nbsp;And within each set I have divided it as such:

I keep the site cards separate in deck protectors because I like to have them available when I play. &nbsp;However seeing how I've played about 2-3 games total in the last 10 years I'll probably move the sites into the album sleeves as soon as I finish up trading to complete my sets. &nbsp;Maybe I'll put the hero and minion versions of each site together.
Top

Since I use my cards mainly for deck-building instead of collecting, I have mine sorted by type. &nbsp;So in my resource binder, I have Allys, then Factions, then Items (Minor first, then Major, then Greater, etc.). &nbsp;The short events are grouped together, long events, then perms. &nbsp;Also they are sub-grouped by strategy (Dunking cards are together, Scout Only cards together, etc.)

Hazards are done pretty much the same way: Man hazards together, Animals together, Spiders and Wolves together, etc.
Top

I'll sort them by sets, then by categories(characters, sites, hazards,etc), then alphabetically.

I'll probably put 1 of all unique and 3 of all non unique in the binders, so each binders would be a play set of one or more sets.
Then, I'll leave what's left of my cards in my boxes.

I would like to put them all in binders but there is some cards I just have too many...maybe I'll put all copies of the rares in the binders and leave only the commons and uncos in my boxes, but then, it would not be play sets binders...

I really want to do it only once so I have to be sure! lol
Top

I'll put only one copy of each card so that I've only a full set (not a play set) in my binder. I need to many cards to have a play set of any of the set and I would prefer not to touch the cards in the binder, so the less there is in them, the less I'll need in decks.

It would also be easier this way to know which cards I need to finish my sets.
Top

I recently have the idea to sort cards by order of appearance in the books.

Eric, is it possible for you to provide the list of cards chronological ordered ?
It would spare lot a time for all collectors who want to do it !
Thank you in advance.
Hrum, Hoom ! Do not be hasty, that is my motto.
Top

In my case I divide by set characters, resources and hazards but keep all sites together (divided by hero/hazard sites). I then sort my characters by race and followed by mind and strength. Resources and Hazards are furher divided according to their type &nbsp;(short/long/permanent events, allies, items, creatures) and then alphabetically. Only exception: I keep Nazguls and Dragons togheter, always

Stepping across some older photos I recently remembered my old collection "system". I made that up from &nbsp;about 14 thin, wooden boards (sized about A2 format) which could be put like drawers into a big wooden, also self-made box. On the boards, I fixed a number of white cardboard stripes so that the surface was divided into several cells like in a table. Each cell could be filled with up to ~ 30 / 40 cards. At the end, each specific card got its own cell being filled with all copies from that card that I had. I made these boards when there were only METW, METD and MEDM out, each of the 700+ cards finally got its own cell.

I had the idea to make an easy to use collection box. However, in the end also this somewhat nonstandard system didn't prove to be of great help when it came to constructing/breaking up decks. After a few years, I put most of the cards back into the ordinary cardboard boxes that were sold for the special German editions.

To give you an idea, have a look at these photos, for which I paved half of my room's floor with the boards. Normally, these would be placed within the box of which now, unfortunately, I have no picture. 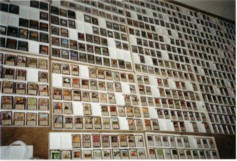 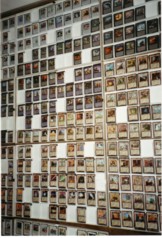 ^THAT is utter coolness. Maybe not the most practical way now that there's so many expansions, but really cool one. I can imagine a treasure box full of these wooden boards. &nbsp;

Return to “All About the Cards”